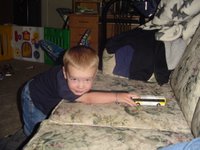 I have had a number of people ask me questions about Evan's heart defect so I thought I would do a FAQ so everyone could get to know his heart better.

Q: What defect does Evan have?

A: There is no real name for his defect because he has several different ones. As you can see Evan has a number of different things going on with his heart. His main defect is his single ventricle so that is what he is usually classified as but his is a little more complicated than most single ventricles.

Q: Will he be having any more surgeries?

A: Yes, he will be. In mid August or early September Evan will be having the completion of his fontan (this is discussed in the link about single ventricles), that of course is if his remainder of his ventricle wall is not causing issues. If that is the case then he will be having another surgery at a yet to be determined time. Evan will also have to have surgeries to replace his pacemaker. Right now because he is so young and his heart rate needs to be higher than an adults the pacemaker battery will not last as long as it will when he gets older. At the rate he is being paced currently the pacemaker will last roughly three to four years. Of course the surgery for that is very minor compared to open heart surgery so it will not be as huge of an ordeal. There is also the possibility that he may have things pop up unexpectedly and then all bets are off. Update 1-23-07 Evan sailed through his surgery and had only minimal complications. His pacemaker had to be replaced sooner than anticipated because the surgery caused swelling which made the pacer wires have to use more electricity to work which drained the battery. Now we are concentrating on file with out surgery hanging over us.

These are the main questions that I have been asked. If you have one let me know in comments and I will add it to this post.
Posted by Awesome Mom at 1:48 PM

I'm still here, just been swamped for the past little while. Enjoyed catching up on your blog, looks like things are busy, and great way explaining Evan's heart condition by the way, oh and nice illustration too. Anyway, I've got to run again, I'll stop by with a real comment soon. :)

thanks for the info on evan...i admire you even more now!

Wow, you are an awesome mom, aren't you? I bet you could almost be a cardiologist with all that you know.

So was he considered to have Transposition too since the PA & Aorta were switched? At least, that was the way I understood the diagram. As you state though, the single ventricle is the most central defect.