The trip to the dentist

I had been slacking while we lived in Kansas and did not take the kids to the dentist. We got a glowing recommendation for a pediatric dentist here that also is noted for working well with special needs children so I scheduled an appointment. They boys had a great visit, Daniel is the only one who cried and that was expected.

All three boy have a tooth that is not forming enamel as it should which is not entirely unexpected since I had that same issues as a kid. We are just going to keep a careful watch on the teeth and see if they start forming cavities or not. Harry apparently fell on his face and cracked the root of one of his front teeth so we are also going to watch that to make sure that there are no signs of infection.

Evan of course is the complicated kid. He has a cavity in one of him permanent molars. He is missing an adult tooth plus three of his wisdom teeth and one of his adult molars is not forming well. Apparently kids with birth defects often are missing teeth or have them malformed so this was not unexpected to the dentist. The wisdom teeth not being there could also be attributed to genetics since my father did not have any at all. The one wisdom tooth is right next to the malformed molar so eventually they can move it forward and put it where the malformed molar is. With the missing adult tooth the hope is that the baby tooth does not come out and grows with the mouth. If that does not happen then a cap can be put on the baby tooth to make it match the other teeth.
Posted by Awesome Mom at 9:05 PM 5 comments:

It was a crazy start to the holiday rush. Evan and Harry decided that they wanted to be superheros. They have become very interested in Veggie Tales (thanks to us being able to watch our instant Netflix queue via our Wii on our tv) and there was an episode about Larry the Cucumber wanting to be a superhero. I drew the line at making them helmets with plungers for the ears so they could climb walls.

I bought some fabric markers and white shirts and colored versions of the superman logo on the front of their shirts. Pillowcases became capes as I have no idea where a fabric store is near by and really don't like running all over for things anymore. I guess that is what happens when you live in the middle of nowhere and it is a hassle to just go grocery shopping. I can't bag on the town I live in too much because there is a store in town that sells yarn and knitting needles (along hand knit and woven goodies for the tourists) so at least my knitting emergencies are easy enough to handle.

Daniel was going to be a punk rocker, but I found out that the hair paste I bought to turn his hair into a mohawk was no match for the stubborn curl of his hair. A quick last second search through our saved costumes turned up the kitty costume which fit him perfectly.

My husband was out of town for part of last week so out pumpkins were carved much later than me normally do but that was ok because that meant there was no visible signs of rotting when we hauled them to the ward Trunk or Treat on Saturday. That is where the pictures below were taken. Sunday my husband took the older kids out around the neighborhood and Daniel and I stayed at home handing out candy. I don't take my kids out until they are old enough to actually say trick or treat ect, as it really looks like a blatant candy grab instead of the subtle one that I have with the older boys. 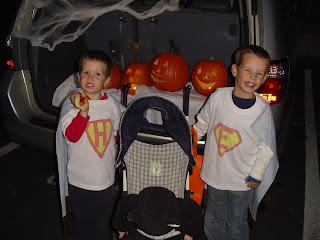 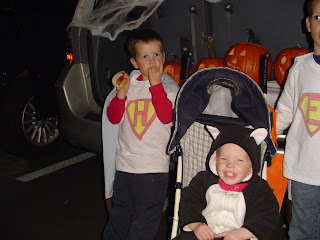 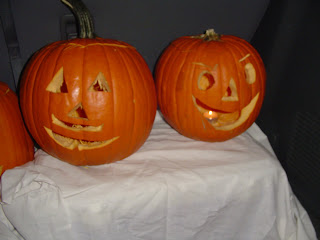 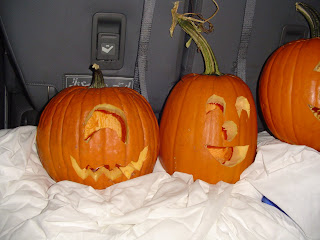