The last batch of pictures

These are the pictures from our visit to the state history museum. They were having a special car exhibit that was actually was a bit of a let down in my humble opinion (not enough cars). We made the best of it though and I think the kids had fun. 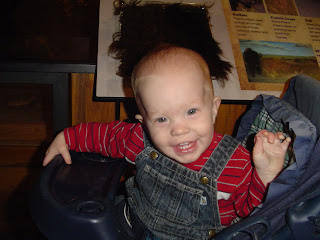 I kept trying to get a picture of Daniel petting the buffalo fur but he kept looking at the camera and hamming it up. He is so cute it was impossible to get frustrated with him. 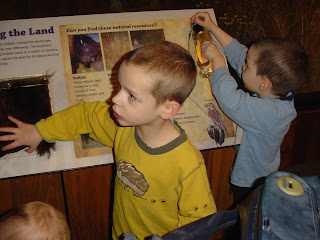 Evan and Harry were a little more cooperative. 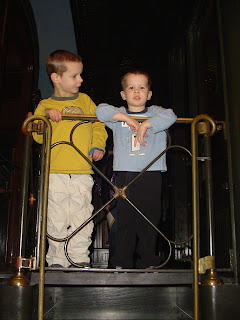 I was not able to take the stroller up to see the part of the train the boys wanted to see so I kept moving and snapped a few pictures. The boys thought it was super funny to see me down there when they were up there. 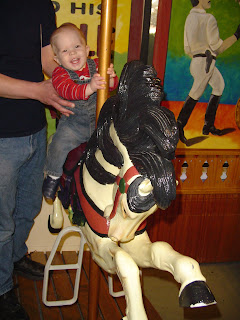 Daniel taking a ride on a carousel horse in the children's play area. 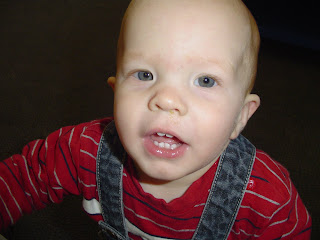 Too cute for words! 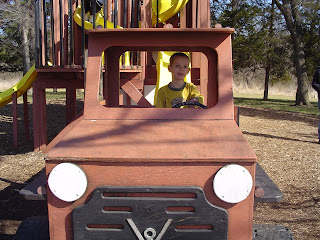 There was a playground outside so we let them run around while my husband went back to ask about the nature trails that he had heard were in the area. We had a nice walk and the weather was great. Sadly we got snow the next day which made me very sad. 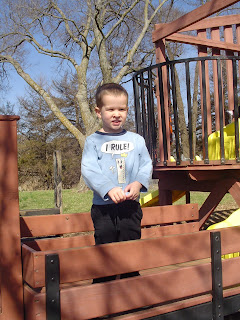 Harry barely paused long enough from his running around to let me take this picture. 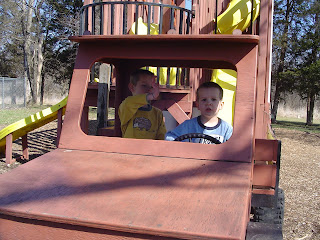 Evan mad that Harry is in his rightful driving spot. I pulled them apart before blood was shed.
Posted by Awesome Mom at 10:39 PM 4 comments:

I have more spring break pics but the camera is upstairs and I am downstairs and I don't feel like fixing the situation so that we are both in the same room.

Today I had a "fun" adventure. On the way back from taking Evan (plus the younger kids) to the big city for a cardiology appointment I got a flat. I was driving on a bridge and felt an odd vibration, at first I thought it was the road since it was under construction but then a guy pulled up next to me and was trying to tell me something. That set off my danger meter so I pulled off as soon as I could (which was not super soon since there were no handy shoulders thanks to construction). I ended up by a toll booth and had to drive on a rim for a little bit to get there.

Evan and Harry were both thrilled when I told them the tire was broken, Harry wanted to get out and see it. Daniel was not happy to be still stuck in his car seat after being stuck in his stroller for so long too. A nice toll booth employee called a trooper to come over and help us get the tire changed. I am a rather liberated woman, but cars are really not my thing and I had a very cranky baby to deal with so I was very thankful for the help.

So tomorrow we get to go buy a set of new tires. We have been pricing them because the tires were getting old, I just wish we had not waited so long, so that this whole thing could have been avoided. I am glad that the Blue and Gold dinner was changed to next week because we would have for sure been late.
Posted by Awesome Mom at 11:10 PM 2 comments:

After much weeping, wailing, and gnashing of teeth the family room was cleaned. What should have taken an hour or so to do took part of the preceding evening plus all morning. The deadline was noon after which I was going to gather up all remaining toys and give them away. Daddy took pity on the kids and assisted them so that they were able to meet the deadline. Mommy was a bit sad that she missed out on getting rid of toys who's only purpose is to be scattered all over the floor. 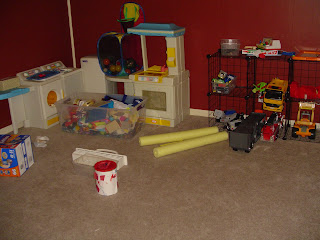 Previous to the cleanup you could barely see the floor. It is hard to decide if nagging them constantly to pick up after every toy they play with is worse than the massive amount of nagging I have to do to get them to pick up their own toys after a few days of letting things slide. They are more than happy to pick up baby toys or even help pick up other things, but the second I ask them to pick up a toy they have played with it is the end of the world.
Posted by Awesome Mom at 12:27 AM 5 comments:

To make up for the craptastic winter break the boys had thanks to awful winter weather we have been taking them to see some of the local sights. There is not a whole lot to do besides to go to the zoo (which we did on Saturday) but what there is to do conveniently enough involves vehicles, so the boys are thrilled.

Today we took a tour of the local air museum. Here are some pic as proof that yes we did get out of the house. 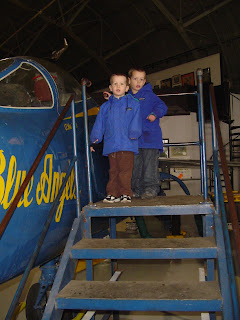 Evan and Harry just had to climb up every set of stairs they could. "Look a seat!" and "Look another seat" 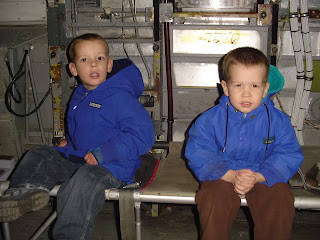 Here are the boys ready for an important mission behind enemy lines. 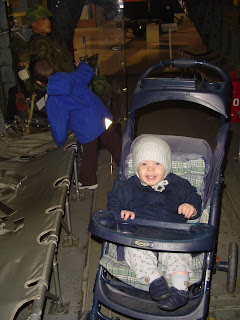 Daniel is coming too! 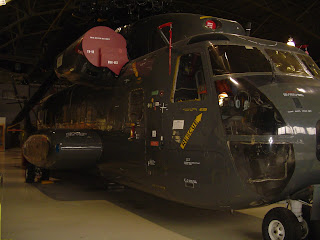 The outside of the helicopter. 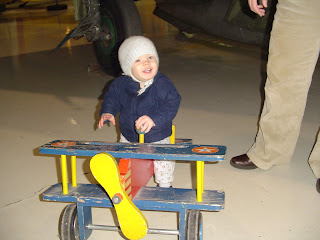 As I am quietly trying not to panic as I attempt to plan the Blue and Gold dinner for the ward I can't help but almost laugh at the irony of me ending up being in charge of it. I have never actually been to one! I have all sisters, so we were not exactly active in cub scouts or boy scouts. Last year we could have gone, but me being pregnant and really not wanting to deal with two rambunctious little boys helped me decide not to go. At least this will be the best one I have ever been to even if nothing goes right.
Posted by Awesome Mom at 11:44 PM 6 comments:

This post is brought to you by Ebeanstalk. Ebeanstalk is a website dedicated to selecting great baby toys and toddler toys. They rely on the opinions and feedback of bloggers and moms around the country to continue selecting great toys to sell. Their team of child experts also helps them pick out learning toys to make sure your child gets the most out of his or her playtime!

The Infantino elephant shape sorter is a big hit in my house. The box says it it a toy for 12+ months, but the two older boys were all over it too. I have a hard time getting them to leave it alone so that Daniel can even look at it. Harry especially loves to "help" Daniel play with it which involves Harry doing everything and scolding Daniel when he dares touch his toy.

What I love about it is that the shape sorter is not sealed up. I bought one with more types of shapes when Evan was a baby and I have rued that day. It is a sphere and impossible for a child to open on his own let alone a number of adults. That lead to me having to open the stupid thing about a billion times a day when Harry was on a shape sorting streak. This sorter is more geared towards independent play which is lovely and makes me very happy. I predict that this little elephant will be with the family for a long time. 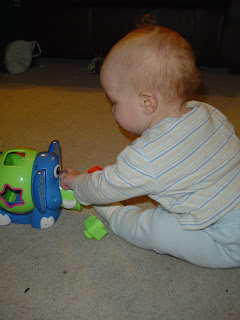 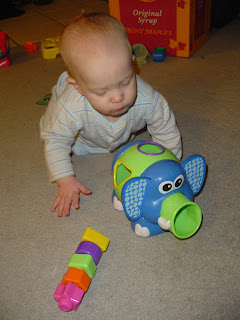 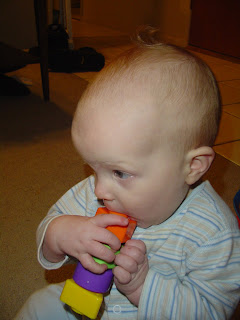 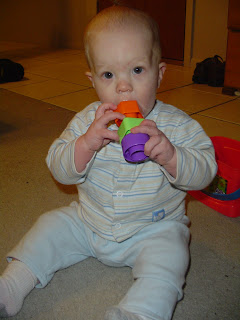 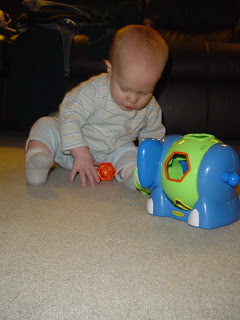 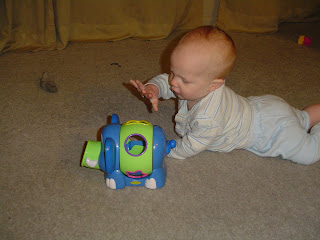 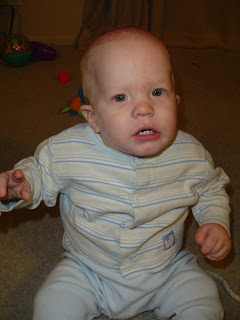 This is Daniel's growl face. He loves to growl at me and giggles like a loon if I growl back at him.

February was an odd month, it seemed to last forever then BAM! it was over and I was rushing to make birthday preparations for Evan. We are also in perpetual cold land and days after I finally stopped coughing I got sick again with another cold which is why I have been rather quiet. It is hard to concentrate on blogging when your head is killing you due to your sinuses being packed full of snot.

On a more fun note, here are pictures of Evan's big day. 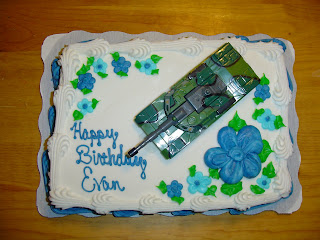 You may wonder why there is a tank on a flower cake or why there are flowers on a tank cake. Well here's the thing.. the tank cake looked like it had splotches of mold on it which was not terribly appetizing. I could not think of anything else to suggest to put on the cake other than flowers... so there are flowers on the cake. I know the lady taking my order thought I was nuts. 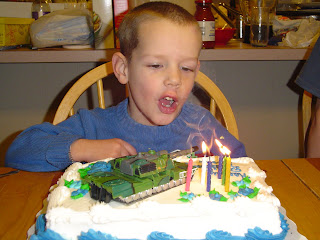 Evan didn't care what the frosting looked like, he just wanted the tank. 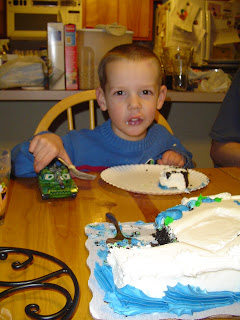 Here he is "shooting" mom. He also "shot" grandpa on the phone later that evening but grandpa had no idea what was going on since video phones are not in common use. 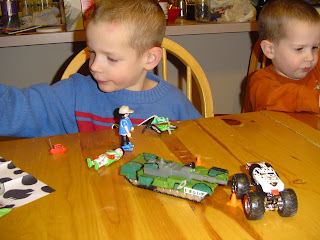 Evan with his presents. He had a blast with them so I know I picked well.
Posted by Awesome Mom at 8:24 PM 4 comments: