Well I was right about my last post. Thursday night or early Friday morning Evan tossed his cookies just the once leaving mom a fun surprise to find in the morning. At least this time he did it over the side of his bed so he did not sleep in it all night like he did once. I can't get him to come and tell us when he barfs in the middle of the night, he just rolls over and goes back to sleep.

I had a feeling he would be ok all day but made him stay home so that I did my due diligence in regards to infection control. He was not happy to be stuck at home while Harry got to go to school and visit a fire station.

I have been hit by an annoying cold. I wake up in the morning with a massively dry mouth because I was not able to breathe from my nose and was mouth breathing all night. I also loose my voice at odd times and am coughing like a 10 pack a day smoker. I am really grumpy when I am sick.

I got a bit of a surprise this morning. I was called to be the second councilor in the primary presidency. After we got the infamous general "so and so would like to meet with you" call any LDS person knows so well my husband and I threw out theories about what was going on. We were hoping for releases so that we could skip church guilt free, but Heavenly Father had other ideas apparently. We are moving this summer so I was kind of shocked that I got such a weighty calling.
Posted by Awesome Mom at 11:50 PM 6 comments:

I probably should not be posting this since I could be tempting fate.

Saturday night Harry started crying and crying for no reason and would not be consoled. I sent him to his room to lie down thinking he was just tired. He ended up throwing up on his bed (thankfully my husband did the cleanup since he was closest). Shortly after clearing the contents of his stomach he was back up and very chipper. No more barfing but he has become attached to Barfy the barf bowl. It will be fun trying to convince him that he does not need it any more.

My husband decided that it was food poisoning from Harry's lovely habit of eating the food off the floor that the baby has dropped. I am not convinced since crackers are not what you think of when it comes to food borne illness. We need to get a dog so I won't have to clean the floors every five seconds.
Posted by Awesome Mom at 11:05 PM 7 comments:

We have been having some really warm weather the last few days and as a result the snow is rapidly vanishing. I am giddy!

If I believed in a hell where people are stuck in situations that are personally tailored to be especially awful to them then I just got a taste of hell. I left my house at oneish and did not arrive home until after 6 all for one doctor's appointment for Evan. I got to shove Harry and Daniel in the car and them haul them both back to get Evan from school and then we had to drive an hour in drizzle that was compounded with nasty dirty melted snow being splashed up onto my windshield.

The part that was especially hellish was the wait in the small exam room that was filled with quite a few things that should not be touched. The kids had to quiz me multiple times on what each item was and also had to attempt to play with said items more than once. Daniel even squiggled and squirmed from the middle of the room to the chairs so that he could chew on the legs. That kid is determined let me tell you. I also ended up having to feed him in a chair with no arms to speak of which kills my back.

When the doctor comes in it is not THE doctor but a Fellow who is merely working for THE doctor. This confused the heck out of Evan who despite his extensive time with doctors is not aware of the different ranks of doctors (slacker!). He wants to go home after doing his dog and pony show for her and is cranky he has to wait for THE doctor to come.

More climbing and touching ensues. Mom starts to develop an eye twitch and Daniel gets cranky because he is tired so mom has to pace the room to help sooth him. I eventually caved and let the kids walk around in the halls a bit and pester the nurses because if I had not bad things would have happened.

At the end of all this I am told that Evan had pretty darn good range of motion for a hemi kid, we should consider getting him into water therapy this summer, when he gets a bit older we should think about getting his cognative abilities tested so that we can figure out if there are any types of deficits that we should be aware of that could hinder his education and that a hinged AFO is something that will be useful for him. Luckily with the hinged AFO thing we recently got him a new one and they still have the molds for it so we don't have to go back and get it redone. We just have to come when the new one is in.

Evan's report card and IEP progress report came this week and he is doing awesome! Some of his year long IEP goals have already been met. In the classroom he had continued to improve and I have noticed a big difference in a lot of things when I am working with him on homework.
Posted by Awesome Mom at 10:04 PM 6 comments:

Today was a snow day which despite Harry pooping in his pants and biting Evan was welcome. The high was around 4 and I didn't really fancy going out in that kind of cold. The low tonight is supposed to be -11 with another single digit high. Luckily school is canceled for tomorrow so we will again get to stay snug in our warm house. Since I missed posting yesterday I am including two pictures. 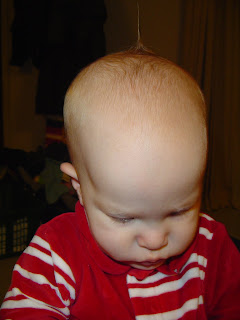 Proof that on Daniels bald little noggin some hair does indeed lurk. 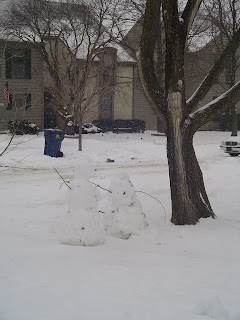 This pic makes me cry, it is the start of the snow storm that has us hiding in our homes.
Posted by Awesome Mom at 10:18 PM 6 comments:

Sometimes life gets you down (like when the weather is insanely cold and more snow is predicted) and then life throws you a little something that makes you squee. I threw this in my list of patterns that someday I wanted to knit only to find out that it was taken down due to issues with the BBC (note to self: print patterns that you are going to knit when you decide to put them in your list instead of waiting). Then through a serendipitous event I saw that it was back up and ready for me to print out so that I can make some of them as gifts for a certain Dr Who fan in my family who has a birthday coming up. Now I just hope that I can get my fanny in gear and get it done in time.
Posted by Awesome Mom at 12:06 AM 4 comments:

No picture today but a bit of a whine. I am so tired of the snow. Last year it never stuck around this long and I am pretty sure that besides a few really bad cold snaps it was a heck of a lot warmer last year. This winter is brutal. We still have the snow from Christmas plus a few inches from Saturday night/Sunday morning and there is more snow in the forecast plus insanely cold weather. I like snow in small doses, if I wanted to have more I would move to Alaska or Canada. Spring can not come soon enough. Oops gotta go, baby crying.
Posted by Awesome Mom at 11:58 PM 3 comments: 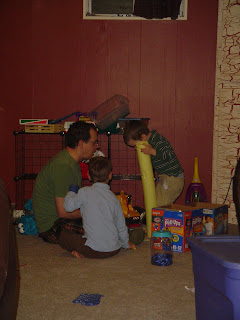 Someone is distracting the boys when they are supposed to be picking up toys.
Posted by Awesome Mom at 11:23 PM 2 comments:

I have been really missing having family around. I thought it would be fun to share a bit more about what is going on in our lives through pictures. I am going to try and take more random pictures of the kids (hopefully at least once a day but I am not going to commit to that). 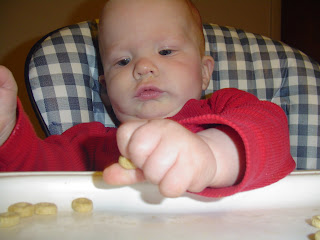 Daniel showing off his emerging self feeding skills. He is starting to actually get the food in his mouth the majority of the time. He is also better at chewing and moving the food around in his mouth but I still keep a careful eye on him. 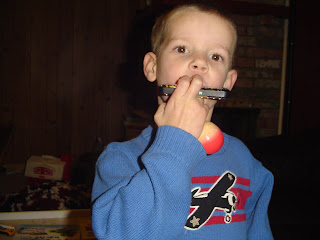 We got a package in the mail from one of the aunties. It was filled with some later Christmas gifts. Evan's gift was some musical intruments and the harmonica was the hands down favorite of Evan (although mom and dad are not super thrilled).
Posted by Awesome Mom at 12:06 PM 1 comment: