School pictures and other stuff

Evan still does not have a para. They said they would get him one and then the next day it was pointed out that his IEP did not state explicitly that he had to have a para (I am not sure why this ended up that way, I guess the person that wrote was just a little too subtle and gave too much credit to the school district folk's intelligence). Then the next day they sent out evaluators to see for themselves because the word of everyone else involved with him in school was not good enough I guess. They conceded that he did need a para but that they could not hire one, they would have to look at the existing para's schedules and transfer one to work with him.

Needless to say I am tired of all the bouncing around. The best news is that a review of Evan's IEP has been scheduled and that it will be rewritten to explicitly state that he needs a one on one para. After that the district will not have any wiggle room to try and screw Evan over with technicalities. Hopefully by the end of next week he will have the helps he needs and he will be able to progress to the full extent possible.

Check out my cute boys! They did great smiling for the camera. 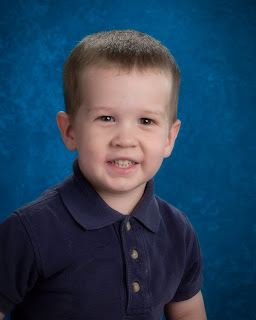 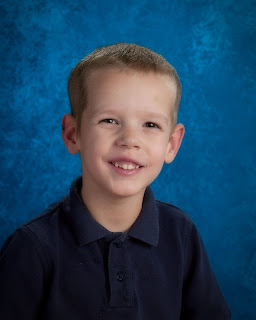 I am hopeful that my educational frustrations in behalf of Evan are over for the moment.

All week Evan has been going to another Kindergarten class that has a part time para so that he would get some help and several afternoons another para has been able to come in the afternoon and also help out. This morning the teacher told me that the district had had an amazing change of heart and that they were going to actually do what they were legally required to do in the first place which is get Evan a para. I am hoping that they do not drag the hiring of said para out really long in a further attempt to save just a little bit more money.

I find it rather telling that they only do it after I let the principle know (so he could tell them during a meeting) that I had contacted an advocacy group. They never really had a leg to stand on in the first place, so it is puzzling why they tried to mess around in the first place. I know the budget is tight but come on already, there is a clear need and he is legally entitled to have an education provided for him that caters to his special needs. I am hopeful that soon Evan will get back to his regular class room and have a full time para dedicated to his needs and who will learn his quirks.
Posted by Awesome Mom at 10:17 PM 9 comments:

I hate to make this be a whiny poor Awesome Mom blog but today was a heck of a day and not in a good way and I need to vent a bit.

While Evan's teacher and school has been amazingly awesome I am very angry at the school district. When Evan's IEP was written it was stated numerous times that he would need a lot of one on one attention and therefore needed a para to help keep him on track. The school district had plenty of time to go out and hire him a para so that things would be in place for his entrance into school. They failed to do so and so far he has been having substitute teachers come in and help him out. At the beginning of the year the talk was well we just have to find the right person for him and that any time now we will get someone permanent. Today that changed to sorry we are no longer providing him with a para starting Monday.

I am furious! First off they waited until the end of the week to tell us (I am sure on purpose) so that we are scrambling to get him help for the start of the week. Next they are ignoring the opinion of the evaluators that wrote the IEP, Evan's teacher, the principal of the school and me who all think he needs someone to help keep him on track. As soon as I got home after hearing the news I called an advocacy group to get some extra oomph to my momma bear growl. The school district is not gonna know what hit them, because Evan will get what he needs and I am not going to stop bugging them until he does. They will not try and save money at the expense of my son's education.

The second set of issues that hit me today was both boys got in trouble at school for hitting. Evan tried to head butt his teacher, something he tries with Harry when they are fighting. I had a talk with him, one that I hope will sink into his brain. I also plan on harping on it every chance I get over the weekend for both boys. Harry's was more out of frustrtion and tiredness. He has been skipping his nap lately and it is catching up with him and when something went wrong at school he just lost it. I try and keep the boys from being too physical when fighting but I can't be everywhere at once so it seeps in. I am hoping that these are isolated events and a stern talking to will be enough.

I need some chocolate.
Posted by Awesome Mom at 8:08 PM 10 comments:

Three cheers for the barf bowl!

I knew it would happen eventually. Schools are a cesspool of germs and other nasty things. All said I think we got off relatively easy. Evan missed his first day of school due to illness and he lost his second tooth.

Sunday evening I yoinked his tooth out, it was hanging by a thread and annoying me. The Tooth Fairy was a total slacker and did not come, but upon inspection of her gum stash it was revealed that she was missing the necessary supplies any way. Sometime that night Evan threw up in his bed and did not even wake us up, he just went back to sleep (odd kid). He seemed pretty ok if a bit too willing to curl up on the couch with his trusty barf bowl. Lunch time rolled around and we thought he was ok to eat a regular meal but he wasn't. The really surreal thing about lunch was that as Evan was loosing it Harry was eating his lunch and watching everything with great interest. That kid is utterly fascinated with the whole process.

The Tooth Fairy armed with fresh supplies tried to make her delivery Monday night only to smell vomit in the room. Investigation revealed that Evan had made use of the barf bowl and then went back to sleep despite us telling him to get us if he threw up again. The flashlight woke Evan and Harry up and the Tooth Fairy ended up having to quickly hide the delivery under a handy blanket. I never realized what a screw up the Tooth Fairy was since she was so reliable when I was a kid. Maybe they outsourced her job in order to save on labor costs.

The kids have been driving me nuts all day so I think they are all well enough to go to school tomorrow (fingers crossed).
Posted by Awesome Mom at 4:23 PM 5 comments: