This weekend Kansas got a bit of snow. The worst of it was west of me, but my poor little daffodils are all wilty and frozen now. Kansas is such a tease! I was all excited for Spring to be here but Winter just had to sneak in and ruin everything.
Posted by Awesome Mom at 11:31 PM 6 comments:

The CHD Blog Carnival is up if you would like to read some of the other submissions.

Here are some pics of the few spring flowers that we have in our yard. I am a huge fan of daffodils so we planted over 100 bulbs last fall. The tulips were here when we moved in. we also have a flowering cherry tree that is looking a bit weather beaten after ultra windy storm we had a few days ago. I can't wait for more things to start growing and blooming. 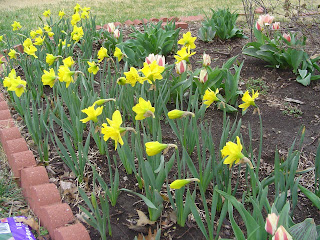 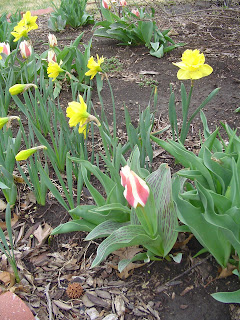 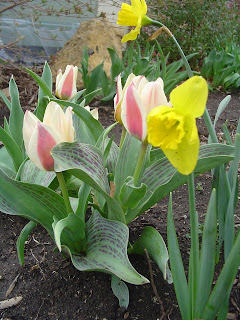 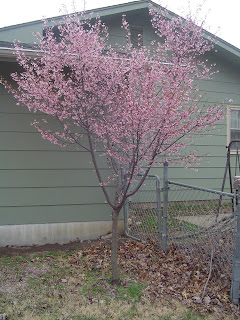 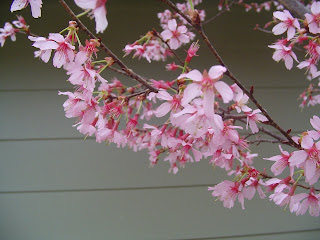 I have been having rather frequent ultrasounds thanks to the possibility of a heart defect and my gestational diabetes. Today was my last one (woo hoo!) before the baby comes. He is still a boy and is looking healthy as can be. Thankfully he is also not measuring off the charts for size although he is still on the big side.

I also had my first 3d ultrasound. It was neat to be able to get a peek at what the baby looks like. He seems to be very much like his brothers in appearance. It was hard to get a good face shot because he was obsessing over his hands and kept sucking on them. I think we may have another thumb sucker on our hands. 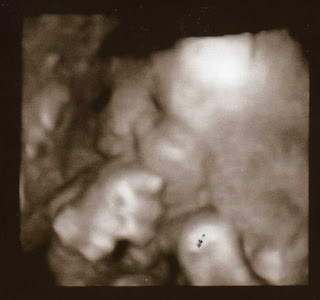 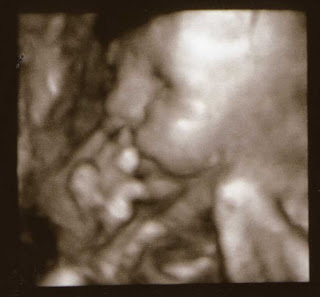 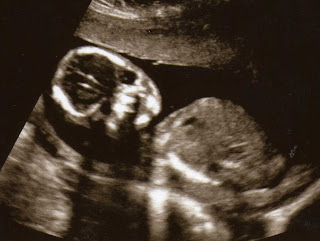 This is an earlier picture that I found hilarious. It looks like I have an angry alien in my stomach waiting to come out to take over the world.
Posted by Awesome Mom at 7:57 PM 16 comments:

When we found out about Evan's heart defect my world turned upside down. All the expectations that I had for my firstborn son were shattered. We could be hopeful that he would survive his surgery but it was never a guarantee. We also had to face the fact that even if he did survive his life would be vastly different from what a "normal" kid's would have been. There is still a lot of uncertainty in Evan's life even now, only time will tell if he will grow up into an independent adult who is able to have all those things that parents hope for their children. The specter of him needing a heart transplant in the future is still there hovering over us.

With all those challenges have come gifts. We could not have asked for a better cardiology team to get him through his tough surgeries. There was no time to research and pick them, we ended up just going where our insurance sent us but even though it was a small program that may have been overlooked by more picky people we were made to feel at home. I never felt stupid when asking any questions. I never felt like I was being rushed through an appointment. They took the time to treat Evan as the child he was and were willing to work around his occasional stubbornness. The hospital where he received his surgeries had an amazing PICU where you could see the doctor on duty and never had to wonder who was making the decisions about many aspects of your child's care. Added to that were wonderful nurses who would treat me as an equal in the care of my child. In addition to his we have had many wonderful therapists who have helped Evan recover from his stroke.

We do not know what the future holds for our family. We can sleep easy knowing that we are surrounded by wonderful caring people who are willing to make sure that Evan gets the best of care.
Posted by Awesome Mom at 8:07 AM 9 comments:

Damselfly wanted some tips on how to garden with little "helpers". When it is time to work in the yard I try and do what I do when I want to attempt something in the house. I try and find some aspect of the chore they can help me with to start with. If that is not working I find them something similar to do in another area away from where I am working. If that is not working then I banish them from the area altogether.

When we were planting the bulbs last fall we let the kids help put them in the ground after my husband dug out a trench for the bulbs. We ended up having to go back and put most of them the right way up, but the kids had a fun time until they got bored. When they got bored and we still needed to plant more bulbs I let them dig dirt in another part of the garden. That entertained them enough that we were able to finish the bulbs. Had the digging caused problems then I would have shooed them off to the back yard where we could keep them contained and out of the way with out having to do more than check on them every so often.

As the boys get older they are able to do a lot more around the house. Harry loves helping with the dishes and can be trusted to put the silverware away in the drawer. He will even separate the smaller spoons from the bigger spoons instead of putting them all together like certain husbands. When I was vacuuming the dining room this morning he rushed downstairs to get his toy vacuum to "help" me. Both boys love doing laundry and could almost do it on their own if they were a bit taller and had a bit more discernment about what they would put in the washer. It is nice to have two short people to do all the bending down for me now that I am getting on in my pregnancy. We now expect them to help clear the table of dishes after the meal (well often it is from the meal before, but we can pretend it is right after the meal). Heck Harry will even get me a new garbage bag when I take out a full one to the trash can and I am sure that if he knew how he would change the toilet paper roll. If Harry keeps his helpful ways up he is going to be a dream husband.


A couple of you have asked to see my pregnant belly. The picture is not that great but I don't really care enough to go and take another. I need a new camera since mine is over five years old and starting to show it's age. The sad thing is that I just now actually figured out how to turn the flash off when I want to. I don't feel as big as I did with my other boys but that also could be my imagination. I do know that my weight gain has not been nearly as insane thanks to my strict diet. 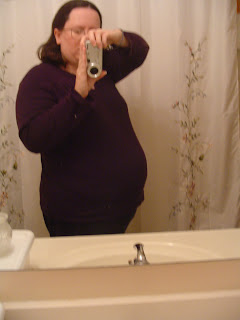 I think my kids are out to get me. Not only is Harry still a bit hit and miss with the potty training, but now Evan seems to want in on it too. He had an accident yesterday and had two today. One was mere moments after I asked him if he needed to go potty. Luckily this week is our downish week where I am not completely slammed with appointments, I am only kind of slammed with appointments. I am going to get our timer back out and have them going every hour. Maybe that will drive it into their brains. I can always hope.

On a nicer note I have been able to get out into the garden. After I posted those lovely pictures of my bulbs coming up it snowed. Boo! Then later in the week we hit a record 86 degrees! Woo hoo! This weekend we managed to find a source of compost (at a local big box store that I hate shopping at, go figure) and other organic gardening goodies. If you don't want to use chemical fertalizers in your garden here in Kansas it can be tough to find stuff. A nice nursery that was close to my house stopped selling compost and I was rather miffed. The big box store that I can tolerate shopping at had nada, so I took a chance and looked at theone I hate shopping at. Now I am planning on slowly piling on the good stuff into my front beds. The former owner was of the let's use shredded trees as mulch school of gardening. I want something that will actually break down into the soil and enrich it instead of just sitting there forever. Hopefully we can get the front beds looking nice.
Posted by Awesome Mom at 12:15 AM 9 comments:

This post is a bit late thanks to me deciding that I was going to stop complaining as much. It has been a bit rough the last few days thanks to naughty children (more poop messes and a food dye incident both thanks to Harry) and my hormones. Angry Pregnant Woman is out in full force and roaming my house.

Evan did not get to have his cake until tonight because he decided to test it out early yesterday. It was one of those I have to go to the bathroom really quick and while i am in there something messy and bad happens incidents. The cake was not too badly damaged but since I had just told him right before I went into the bathroom that if he touched it he would be in trouble I had to follow through.

Here are some pictures. Elmo did not quite turn out the color I wanted but I had already used so much food dye that I did not feel I could really add any more. That frosting wanted to stay pink even though it did get darker as it dried turning a lot redder. I am never ever going to make another one of these cakes. It is just too frustrating for me to try and get that color right. The artist inside me wants perfection and has to have the perfect color and it just drives me nuts. 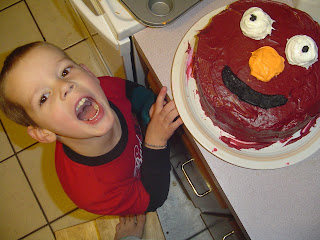 This was a tough shot to get because my baby belly kept trying to get in the way. 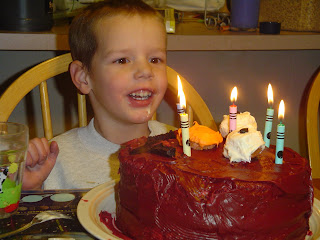 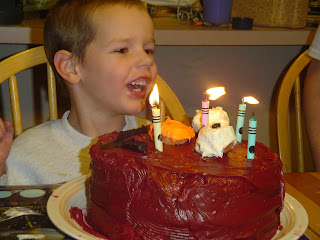 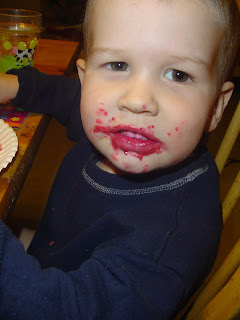 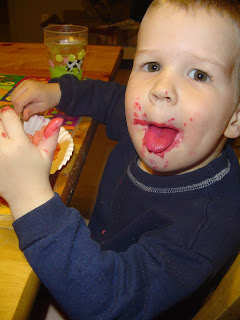 The last two shots are why this cake will not be hanging around too long.
Posted by Awesome Mom at 6:48 PM 11 comments: