I hope everyone had a great Thanksgiving, I know that we did. I am now working my way through our leftover turkey desperately trying to eat it all before we are forced to consign it to the depths of our freezer in the hopes that some day we will remember we have it and actually eat it. My husband's cousin and her family joined us, so we had a full house. 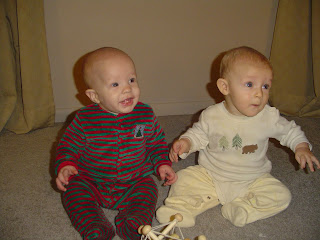 Daniel and his second cousin. They are about a month apart in age. 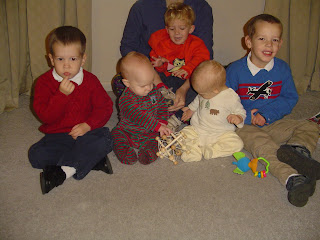 It is hard to believe but Harry is now 4! It has been a year filled with a lot of growth for him. He is really starting to become a capable young child who can do lots of big kid things. 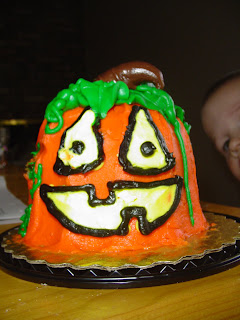 Harry asked for a pumpkin cake. I have a friend that works for a bakery and she decorated this for him. He was very thrilled with his pumpkin cake and it was nice to have a small one so we did not have cake hanging around forever. 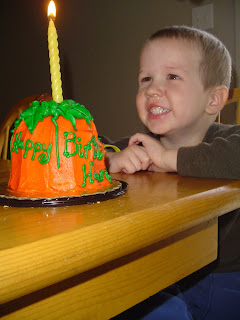 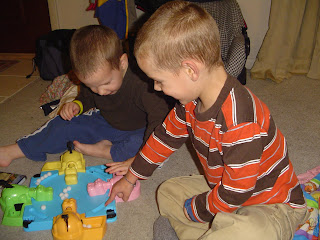 I got Harry Hungry, Hungry Hippos for his birthday. I knew it would be a hit since he thinks things eating other things is super funny. Pug the pug dog. I made it for Harry but Harry picked out the very creative name. A sweater for it is in the works. 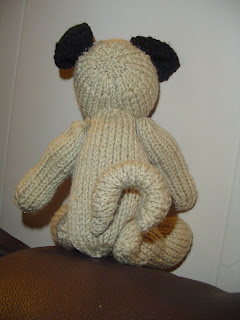 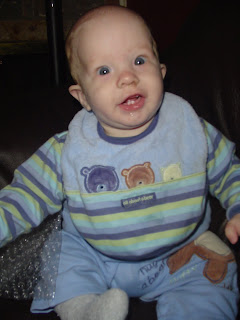 Daniel is a sitter and doing pretty good, he also is getting up on all fours and rocking back and forth. Crawling is around the corner. 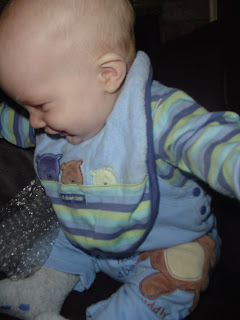 Yesterday was insane! It was insane is a pretty good way (for the most part) but still insane.

Evan's kindergarten class made a Thanksgiving dinner to have at for lunch and of course parents were needed to help out and make sure that the kids were not picking their noses and then touching the food. It was fun and there were plenty of parents to help supervise. Evan's class seems particularly blessed with a lot of willing and helpful parents. I think we are the envy of the other kindergarten classes because we seem to always have more parents helping with things than the other classes. As usual Evan was very excited to have me in school with him.

Later in the afternoon Daniel had his checkup. He is a healthy little guy and hitting all his milestones and growth curves. He was not thrilled with all the shots he got but quickly shook it off to flirt with the nurses.

During all my rushing around the weather was awful. We had our first snow of the season which had the kids all excited but mom not so much. I now realize why my parents were less than thrilled when it snowed. Yeah it looks pretty, but it is not fun having to drive in the stuff. I think my doctor has jinxed me or something becuase every time we go and see him the weather is terrible. Thankfully the snow did not stick around and we are just stuck with cold rain. Brrr!
Posted by Awesome Mom at 9:37 AM 2 comments:

Last weekend Harry went to a birthday party (his first of the year). The day before he carefully chose a coloring book for his friend and I added to the present a package of crayons that I had bought earlier during the back to school sales. An hour before the party I hastily wrapped everything and made a quick card (I have oodles of card stock so I tend to make my own cards for things like this). Harry had a fun time, mom not so much (it was super loud).

It is upon you, my dear readers to help me not feel so bad. Please tell me that I am not the only frazzled mother that has done something like that.
Posted by Awesome Mom at 12:10 AM 9 comments:

Halloween is over but the candy still lingers. The boys got quite a haul between the ward trunk or treat and going around the neighborhood. I think the quality of the candy has also improved since last year, one of our neighbors was giving out king sized candy bars. 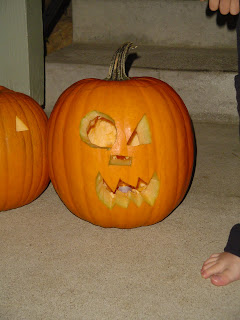 Evan's pumpkin. He drew the shapes on the face (except for the mouth) and I carved them. Now that the pumpkin is a little less fresh, the expression has changed into one of a pumpkin just about to blow an aneurysm. The teeth are less pointy so the mouth is more open and "what the heck!" looking. 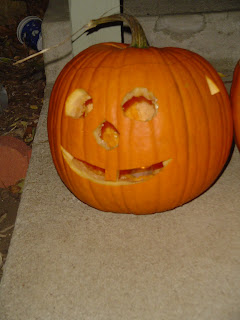 Harry's pumpkin which was carved by my husband. The mouth is an homage to Daniel although Daniel's lone tooth at the time was on the bottom not the top (a fact that my husband did not appreciate me pointing out. The pumpkins this year were given to us by a great friend (thanks again Beth!) and a billion times easier to carve than the ones we had last year. Last year we had to get out the cordless drill to even pierce the skin of the pumpkins! 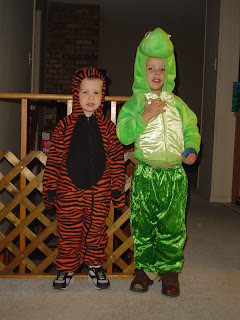 Evan's dragon costume is a loaner (thanks again Beth!). We had a bit of drama with it. Evan wore it to school on the Wednesday before Halloween for the school party and parade. When he came home the pants were missing. A frantic call to Evan's teacher turned up nothing. I was rather bummed that the pants were missing since the costume was not ours to keep. Then on Monday morning as I was getting the kids in coats to leave for school I saw tucked in Evan's sleeve a pair of green pants (pale green pants with nobody inside them). They had been there the whole time!!! The weather had been rather warm (or rainy so we were staying indoors) so his coat had not been in use which is how I missed seeing them sooner. 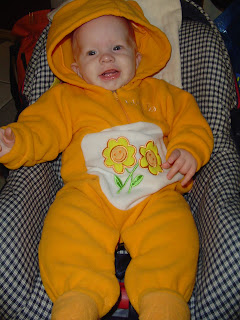 Cuteness!!! This little guy was Friend Bear (a care bear for those not in the know). This was also Evan's first costume and they both looked adorable in it. This picture was taken five seconds before Daniel had an epic melt down due to over stimulation from the ward party. He went to bed early which really killed me when he woke up at 5am thanks to the time change. 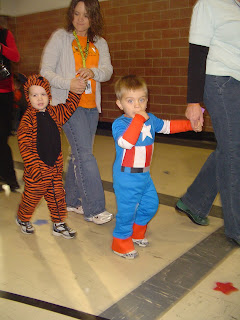 Here is Harry with one of his preschool teachers during the costume parade at school. The pictures are rather blurry, they were moving fast and I had a baby strapped to me. 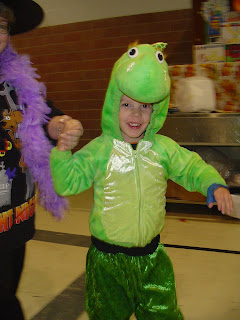 Evan and his para during the parade. He was quite excited to see me there as you can tell. 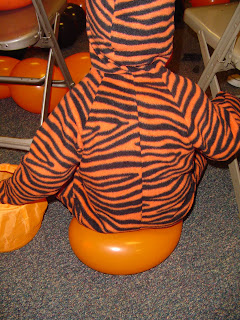 At the ward party there was a game where you popped balloons and got the candy inside. Harry and Evan had a bit of trouble popping them. Harry even sat on his and was not able to get it to pop. Eventually my husband got his keys out to help them out.
Posted by Awesome Mom at 9:03 PM 9 comments: