On Thursday the Kindergartners went on their first ever field trip. Evan's teacher asked me if I would come along and I arranged it so I could. I thought it would be exciting to go along and I was right, it was just not quite the exciting I had been thinking about. There were 58 kids total. Luckily Evan's class had enough parents coming a long that the groups were at most two kids. The other classes were no so lucky and had much bigger groups. Evan's para went along and helped out with another class. The noise was epic. It makes me wonder how the teachers keep their hearing after having to listen to it all day long. We were finished with enough time that I could have gone home before having to go back to school to pick Evan up, but I ended up buying come chocolate and sitting in my car listening to the silence. 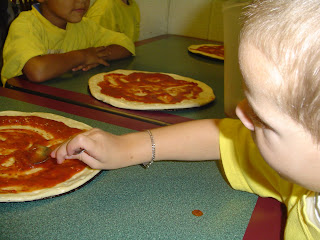 First you put the sauce on. 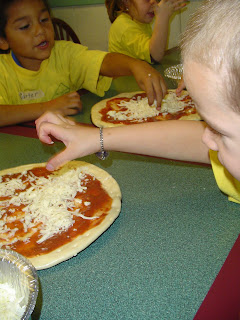 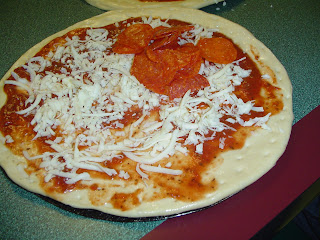 Then the peperoni (Evan just dumped the entire container on the pizza and coudl not understand why I had him spread them out more evenly). 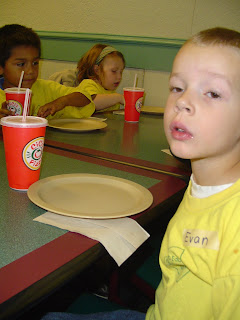 Then we wait for it to cook. 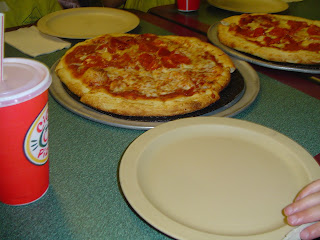 And there is the finished pizza! Time to eat. The adults got to eat pizza that was not made by Kindergartners.

On to the museum of history 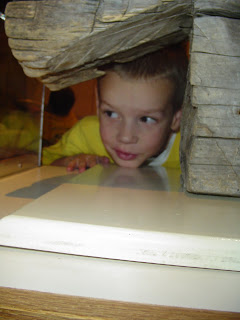 Looking through the window section of a piece of one of the first permanent wooden houses in Kansas. 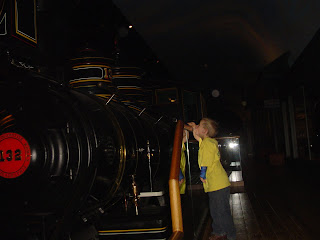 and that's the tooth

Yesterday while I was holding Daniel at Evan's OT appointment I felt a tooth in his little mouth. I knew that this was imminent due to his general crankiness of late and I am hoping that now that this one is cut we will have a bit of a break. I don't have any pictures, it is not like you would see it any way but I do have pictures of him eating solid food for the first time. We introduced solids almost a month ago and he is taking to them like a fish to water. He is starting to expect that at dinner time he will be getting some food too and when I try and skip it he will start fussing at me. I make him a baby mush with some pureed veggie or fruit mixed with the oatmeal baby cereal and a scoop of formula. 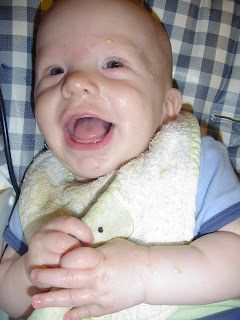 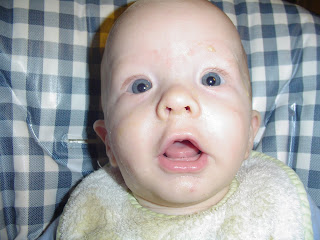 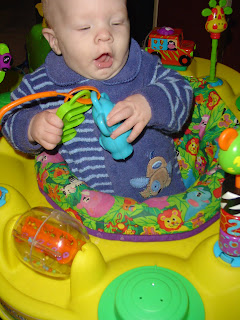 A hot off the press taken today picture. Daniel's new favorite toy. He finally has the trunk strength to play in his exersaucer. This kid has amazingly great trunk strength due to his odd love of tummy time. Harry and Evan loathed tummy time, but every time I put Daniel on the floor for play time he rolls right over on to his stomach. 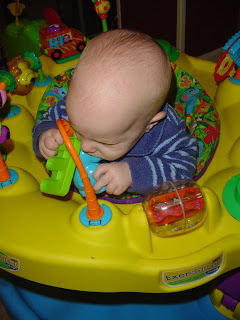 Daniel's favorite toy on the exersaucer thanks to his teething.
Posted by Awesome Mom at 8:53 AM 4 comments:

My kids are a bunch of wierdos (I have no idea where they get it from). Harry still wears a diaper at night due to him being unable to wake himself from sleep to go to the bathroom (Evan is the same way and wears a pull up to bed). This morning he took his diaper off and started sniffing it. He explained to me that he was smelling it and that it smelled like poop. He was so serious about it that I had the hardest time not bursting out into laughter. His preschool recently did a unit on the senses so I am guessing that is where the sniffing random stuff came from.
Posted by Awesome Mom at 11:57 PM 7 comments:

We had Evan's IEP refinement meeting today. It was nice to see all the people who were working hard to make sure that he will get the best education possible. The big change to the IEP was writing in the need for a para explicitly instead of implying it like it was before. Also added was that Evan will get an extra half hour of PT but instead of it being at the school it would be at another building where the PT has bulky equipment that she wants to use with Evan but can't take in her car. Evan's dream to ride a bus will finally come true and I am sure that will be the highlight if his week.

I was a bit aprehensive about taking him out of the class even more than is going on now but it will be during math time which is apparently one of his biggest strengths (unlike his math impaired mother). He blows his peers away in things like number recognition and counting. I guess I should not be shocked about that since he has obsessed over numbers since he was rather young. I do however need to work on teaching him his address and phone number which is something I never really thought about teaching him although I can see why it would be useful. He also needs to learn our last name and associate it with himself and that I am not just Mommy but I have an actual name. He knows my husband's name since I use it fairly often but my husband only seems to call me Honey so Evan rarely hears my actual name. I guess I should count myself lucky that he is not telling his teacher that his mother's name is Honey.

The adaptive PE teacher has a great goal for Evan which is to work on getting Evan to become more independent. Evan is the master at getting people to help him. There are girls in his class that seem to fall over themselves to help him. Any passing stranger falls under his spell and finds themselves assisting him. It was a crazy battle (and sometimes still is) to get him to dress and undress himself. He has the skills but sometimes just decides that he can't do something (naturally at the worst times).

Daniel charmed everyone at the meeting and flirted a lot. He got passed around a fair bit too and only looked for mommy when it was getting close to his feeding time.

I have been knitting and one of the things I have been knitting is so uber cute that it deserves a post of it's own. The problem is getting pictures since the kids will not let them out of their sight. Once I manage that you will be graced with some non baby (and some baby) cuteness.
Posted by Awesome Mom at 11:27 PM 1 comment:

Evan finally has para!!! I saw her with my own eyes this very morning. She should be good since she is a retired Kindergarten/1st grade teacher. It also looks like Evan will be staying in the same classroom he has been going to for the last few weeks, it was a change that was supposed to be temporary but as the weeks dragged on Evan became settled in the new classroom and it would be very disrupting to change him again. As much as I liked his old teacher I think this is a good change. Evan really seems to like his current teacher better than his previous one.

Another huge advantage of the class change is that all the various class party sign ups are full, so I only get asked to help out with the fun stuff. I just signed up to go with them on their first field trip later this month. I am hoping my husband can get the day off work so that I don't have to find someone to watch Daniel and get Harry from preschool.
Posted by Awesome Mom at 8:48 AM 6 comments: