We had Evan's IEP meeting with the new school today. Good news was that they just copied the one from Kansas. The odd news is that parts of it were missing somehow and they has no idea that he was getting PT and adaptive PE. Other good news is that after a long search a OT was found for him. The district is small enough that they do not have them on staff so they had to call around to see if anyone would make the drive all the way out here to help him. Thankfully there was a person that agreed to do it.

According to Evan's teacher he seems to be settling in well to the class. He will sometimes try and get out of answering questions when the whole class is answering at once and is still rather distracted in class at times. Unlike his school in Kansas they did not try and weasel out of having extra help on hand for him. He does not have one para this year, they already had two part time assistants for the classroom.

I left the meeting feeling confident that they were doing everything they could to make sure that Evan was getting the education he needed. It seems like there are a nice bunch of people working with him and that he will make great progress while he is here.
Posted by Awesome Mom at 2:02 AM 3 comments:

I have been rather bad about posting pictures of late and I decided that it was time to play catch up. Here are a few from our last days in Kansas. 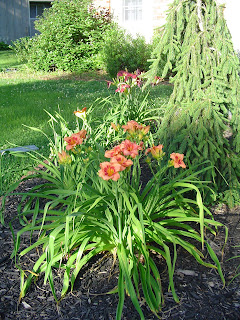 My mother sent me these plants shortly after we moved in to our house in Kansas. This year was amazing for them and they got huge! I was sad that we had to leave them behind. 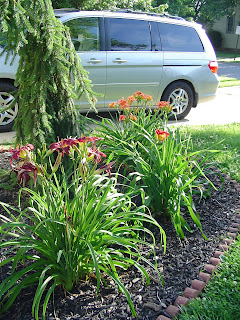 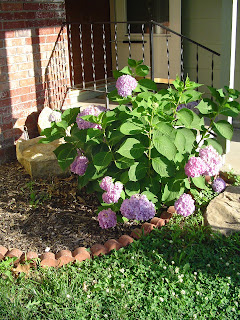 This was a hydrangea that was there when we moved into our house in Kansas but it never bloomed until this spring. I am glad I left it in instead of pulling out because it was neat to see it bloom at least once before we moved. 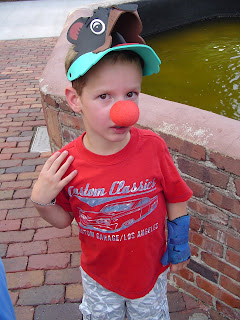 The zoo held a special event for kids with special needs a few weeks before we moved. I thought it would be a fun way to see the zoo one last time. There was a clown there handing out clown noses and Evan was thrilled with his. Harry was having none of it and would not even look at the clown. 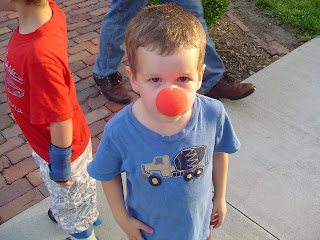 However he did change his mind after awhile when he saw how much fun we were having with the nose and got one of his own. 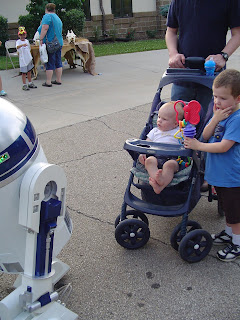 We got to meet R2-D2 and at the time the boys were not quite sure what to make of the robot. We bought a Wii while we were in transit to California and one of the games we bought was the Star Ward Lego game. Now every time Harry sees R2-D2 he tells everyone that it is the Harry Robot. Evan (in case you were wondering) is 3CPO. 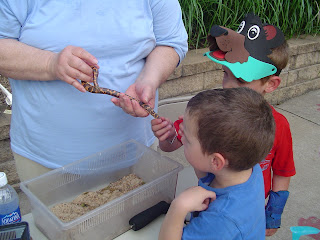 While at the zoo they got to see some of the animals up close. 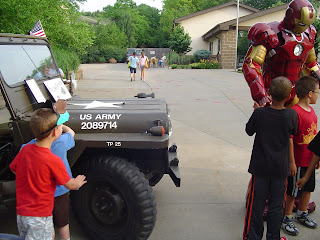 My boys! When everyone was all aflutter about seeing Iron Man they made a beeline to the Jeep and completely ignored everything else while they examined tires and other items of interest on the Jeep.
Posted by Awesome Mom at 2:22 PM 2 comments:

Weekend update according to Evan

One of Evan's speech therapy goals is to be better at recounting past events so his therapist is having me send a note with information about what he did over the weekend. Here is his version:

I went to church. I sang songs. I had bread and water for snack at church. I dropped an RV on a tow truck. It was my dad's birthday. I had a piece of cake. I sang Happy Birthday. We gave Daddy a phone (which is not accurate since he got a laptop as a present). Grandma and Grandpa were there. They played cars with me. They had dinner with us. They slept in the spare room. When they got up, we had a good breakfast.
Posted by Awesome Mom at 6:23 PM 1 comment: