We have one happy little boy

Evan has become very obsessed with train tables. Every time we went to a place that had one it was next to impossible to pry him away. We had decided to try and make him one since my father-in-law has an ample supply of wood (much to my mother-in-law's dismay) and a nice workshop. It was the cheapest way we could think of to get Evan a nice set up.

I was also keeping my eyes open on Craig's list to see if a used one popped up but was not having much success on that front. Every time one came up it was too much money or too far away. I was about to give up when I saw one offered in a town near us for $25. I was thrilled and happy when I found out it was still available. It was a bit tricky to get home in the car but the excitement on Evan's face made it all worth it. Harry likes it too and has fun putting the trains in his mouth. 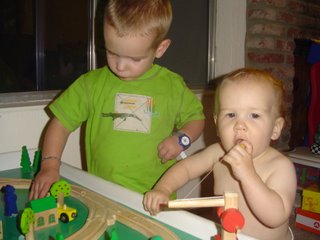 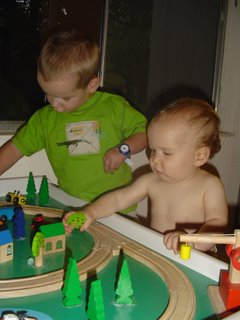 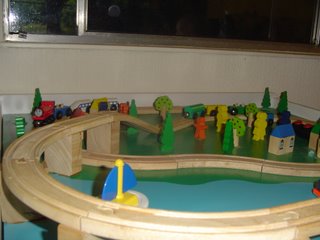 That is awesome!!!! Our daughter wants a train table so bad .... Some Day!!!! Congrats on the great find!

So do you do the ebay thing? I bet you can accessorize the table to death for a dime off ebay. I envy your future hours of busy boys. This is why my home is a Pocket Polly haven.

Wow! What a cool deal you got! (I don't have the patience to watch for things for longer than an afternoon when inspiration strikes!)

I only do Ebay when I am looking for a very specific and rare item. I often find that any savings is eaten up by shipping. That is why I prefer Craig's list because it is all local. And often the prices are better any way because there are no bidding wars to contend with.

What a great deal!!! It looks like the same table that we have. DS1 got it when he was 2 1/2 and loves playing with it. DS2 loves to play trains with his big brother.

Very cool! My kids would love one, but they are so expensive! I didn't think of Craigs list. I'll have to check there now.

this is a great table, no wonder he loves it!

My kids make a beeline for the Thomas table every time we go to a local toy shop... my youngest boy is four so I don't see a table in my future, but boy, if I'd found this great a deal, we would have gotten one a long time ago! Good for you and your little guys!

Just thought I'd pop in to let you know how adorable your boys are!
:)

Wahoo!! That is awesome! I love major finds :)