It is hard for me to believe, but Harry is now three years old. Time sure flies! It is amazing the things he can do now and how much comprehension he has gained. On Friday I bought him an Elmo balloon for his birthday. It rather rapidly deflated much to his dismay so I promised that as soon as daddy got home and we had dinner I would go to the store and get him a new one (I returned the old one as it was obviously defective). He was so very calm an mature about the whole ordeal. He was thrilled with his new balloon and calmly accepted that he could not take it to bed with him until he realized that I meant what I had said and then he sobbed like the two year old he still was. That sure beats the almost instant temper tantrum of a toddler, that is for sure. 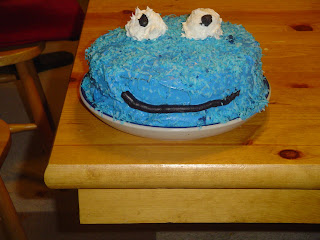 Harry's birthday cake made by yours truly. It is based on one that I had when I was about his age. Harry had been strongly campaigning for some Elmo cupcakes that they have at Sam's Club, but I did not see the need for 24 icky cupcakes with gross frosting since it was only going to be family. I thought that this would be a fun and much tastier alternative. 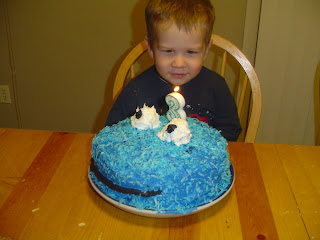 My husband had to help with the candle, Harry is still not a very good candle blower outer. 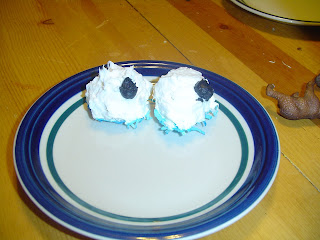 Cookie seems a bit worried about something, I am not sure what though. 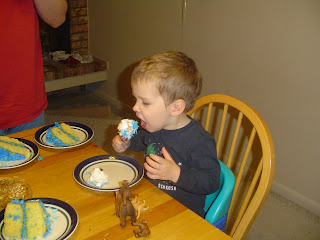 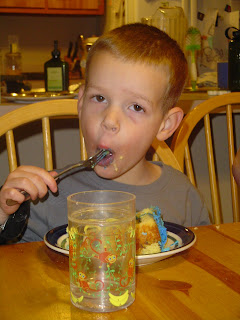 Evan chowing down. He is quite excited for his birthday to come even though it is still months away. He wants an Elmo balloon too. 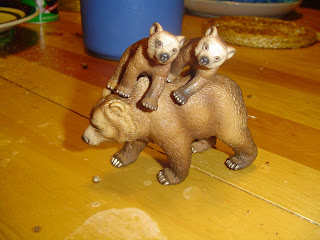 This is how I often feel, poor momma bear.
Posted by Awesome Mom at 8:32 PM

Cute cake! I made an Elmo cake for Emma's second birthday. (Hugely pregnant as I was, lol.) I used a whole jar of no-taste red paste coloring to get the right color! Thank heavens for no-taste red!

You also had your cookie monster cake on your 3rd birthday!

5 year old says those eyes are cake. I say they're frosting covered ping pong balls. Tell us! Either way, they're superute!

Happy Birthday to him!!!
He is my birthday neighboor.

All the best for him

They are frosting covered mini cupcakes, so your 5 year old is right.

What a sweet cake, love the bear family!

The eyeballs on the plate freak me out, seeing him eat them made my neck prickle.

I totally hear you on the mamma bear.

Happy birthday Harry! I love the cake though the eyes on the plate IS kinda ooky

I go so far behind on blog reading that I missed saying Happy Birthday. Happy (very belated) birthday to Harry!