I hope that everyone had a safe and fun Halloween. They boys had a blast and the night was positively balmy. I was walking around the neighborhood in a short sleeved shirt and did not feel the least bit chilly.

We did three streets in our neighborhood which took two hours thanks to short little legs. At one house we got there just as the kids and mom were getting back from their trick or treating. Evan saw them going into the house and thought that from then on that he could go into the different houses too.

The boys got a lot of extra candy due to the cuteness factor of little kids. There were not a lot of kids that went around our neighborhood so we have a ton of candy left over thanks to me over buying. Anyone want some Smarties? I will mail them to you! 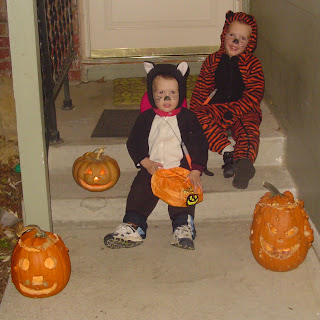 The boys all decked out in their finery. See those pumpkins down there? They were a nightmare to carve. The warty ones were so tough that we had to get out my husband's power drill to carve them. We are so not getting those kinds of pumpkins again. 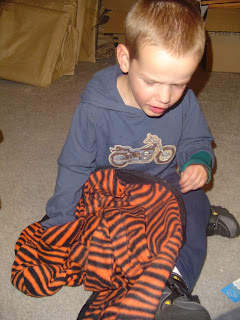 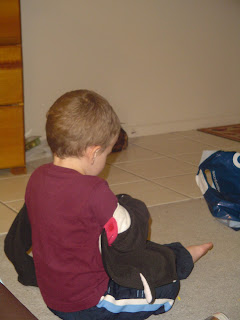 Evan and Harry trying to put on their own costumes. They were very eager to get out and get some candy. 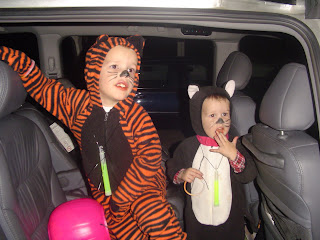 Here are the boys at the ward Trunk Or Treat that we attended Wednesday. Evan was ready to go home once we hit all the cars and was miffed when I told him we had to stay until every one had a chance to get some candy.
Posted by Awesome Mom at 10:29 PM

Cute costumes! It was warm here too.

wow two hours! We made it for one!

Speaking of mail ... I received the most gorgeous yarn in the mail Friday!!!! THANK YOU!

Very cute - looks like they had a great time!

I am glad we did ours on Sunday morning as on Friday night it poured with HARD, COLD rain.

Cute cats you have there!

(My child is all about the Smarties...I think she could rate the houses in the neighborhood on whether or not there were Smarties.)

It was warm, too, for us. I'm irritated. I like it to be cold. I think you should suffer a bit for your reward :)
They look so cute!

Very cute costumes. Looks like you guys had fun!

Oh, they look so cute and I would say that is ambitious! The weather here was gorgeous and my kids were going to stay out longer but in the end, one block brought plenty of candy. Can I send YOU some KitKats? :-)

very awesome blog some how i found you looking for things on our sons birth defect esophageal atresia. I wish you nothing but the best.

Absolutely adorable! And no thank you on the smarties. We have enough candy to last us until next Halloween!