It is hard to believe that Daniel is already two weeks old. He had a great check up, he is already back up and a little over his birth weight. When the doctor listened to his heart he did not hear the murmur, so it is very likely that when he has his follow up echo in a few weeks that nothing at all will show up and that the hole that is present in fetal circulation is closed even if it was a bit slow to do so. Daniel also passed his follow up hearing test, so he officially hears even though we already knew that.

It has been an interesting adjustment having a "little" baby for the first time. We had to actually go out and buy some newborn sized diapers. The sized one diapers were too big to fit him properly with out covering his umbilical stump. He is also drowning a bit in his 0-3 month clothing.

Evan is cracking me up when it comes to "his" Baby Daniel. When he saw the umbilical stump he thought that it was Daniel's manly bits. I had to explain to him what it was and he actually seemed to get the concept. Later on when we were taking the baby to the hospital for the follow up hearing test Evan thought that we were exchanging "old" Daniel for a new Daniel. After all we were taking him to the place he had come from. It took us awhile to convince him that the Daniel we brought home was the same one we had always had. Evan is also obsessed with holding his brother, which he can actually do with a bit of help from me and the couch.

I finally got around to giving him an actual bath for the first time. Like a good mom I took blackmail pictures and am sharing the cuteness. 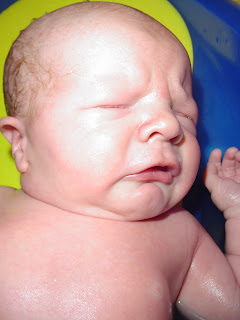 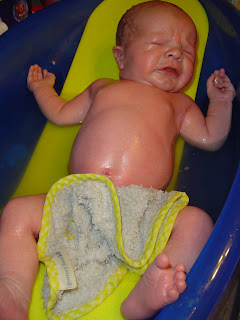 Someone is not very happy about having his bath.
Posted by Awesome Mom at 10:10 PM

Glad you're getting the "new baby" experience! I imagine it must be easier than the "ICU" experience, diaper and clothe problems included. =) Glad Evan is enjoying. Hope Harry is enjoy ya'lls new baby too.

Fabulous news all around! I remember when Baby D was drowning in those clothes too! We actually had to get a few preemie outfits she was so little!

Oooooh, look at that poor little pissed off face! I wanna pick that baby up and hug him and kiss him!

Good you cleared that up about his umbilical stump. Cuz it'd have been REALLY hard to explain it to Evan when it dried up and fell off!